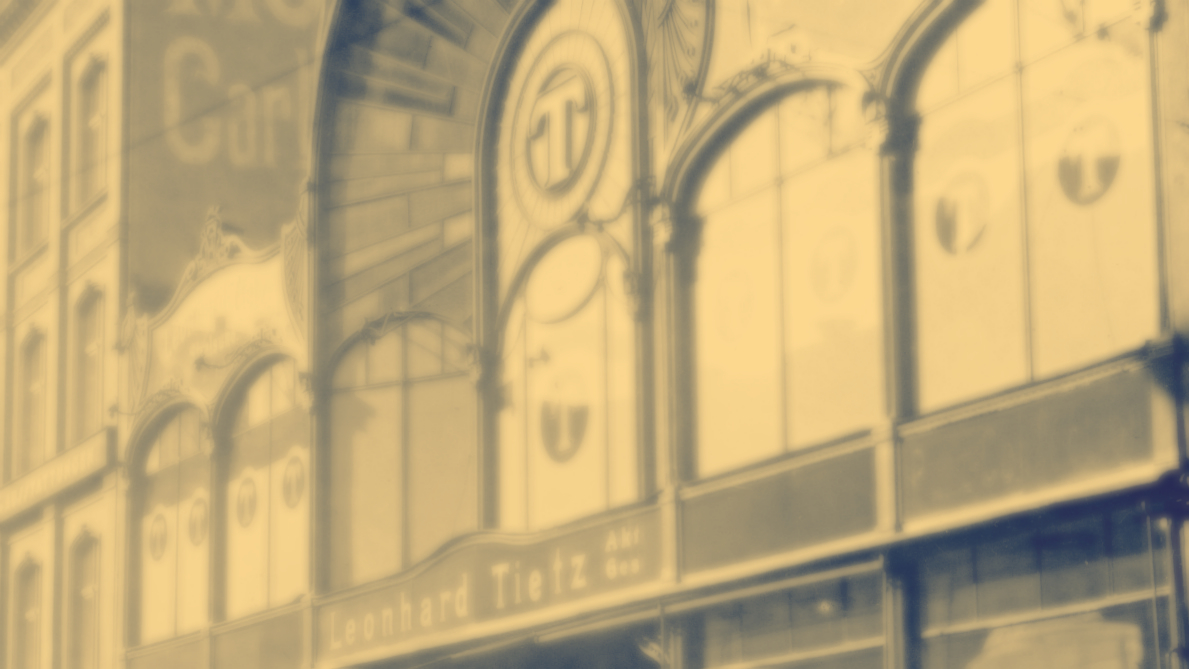 Leonhard Tietz was born on 3 March 1849 in Birnbaum (today Międzychód, Poland) as the first child of Johanna and Jakob Tietz. Four siblings followed. His parents owned carriages and engaged in local trade. Leonhard and his brother Oscar started apprenticeships in businesses owned by family relatives. After some time as a merchant’s assistant in Prenzlau, Leonhard took on his first position as a traveling salesman for the “Tietz Brothers” in Birnbaum. During this time, he became familiar with various forms of commercial trade, the latest manufacturing techniques and also acquired negotiation skills, which proved very useful to him in the years to come.

In 1876, Leonhard Tietz and a school friend from Birnbaum took over the company
“Winkelmann Nachfolger.” In 1878, he became engaged to his early love Flora Baumann. Because – according to his business partner – their wives did not get along, their commercial ties were dissolved. Leonhard Tietz left the company “Winkelmann Nachfolger” for a payment of 3000 Talers. This was the seed money for his new beginning in Stralsund (close to the Baltic Sea in Eastern Germany). On 14 August 1879, Leonhard Tietz opened a small shop in Ossenreyerstrasse 31. In October of that year, he married Flora. Twine, buttons, passementerie (lace and tassels) as well as woolens were offered to “the most honoured audience in Stralsund and environs,” furthermore “all commodities articles of ladies’ and men’s tailoring,” as one could read in the opening advert. Leonhard Tietz and Flora ran the shop, the size of which was 25 square metres, together with a sales assistant and a female apprentice. Like the store of his competitor Georg Wertheim, his own shop could be frequented without an obligation to purchase anything. Tags showing fixed prices were attached to all merchandise. Purchased goods could be returned or exchanged. Already during his first year, Leonhard’s business thrived and he was able to move to Ossenreyerstrasse 21.

The limited number of potential customers in Stralsund and the surrounding area caused
Leonhard Tietz to start stores outside the city. The first branch was opened 1884 in the faraway town of Schweinfurt (Bavaria) and managed by his brother-in-law Sally Baumann. In 1888, Max Baumann, another brother-in-law, opened and ran the second branch in Amberg (Bavaria). On 8 May 1889, a third store opened in the city of Elberfeld, which today is part of Wuppertal. After only three months, it moved to larger premises. Even during its first year, as many as forty employees worked there. Leonhard Tietz had begun to focus more and more on the western parts of Germany. In 1890, he and his family moved to Elberfeld, where the company’s headquarters were established. Before the turn of the century, more “Tietz” branches followed in cities such as Cologne, Aachen, Mainz, Düren, Düsseldorf and Bonn, after 1900 several stores in Belgium.

Tietz in the 20th century

On 11 October 1902, Leonhard Tietz, after having bought a plot of land in Ossenreyerstrasse 19 in Stralsund, opened a modern department store at this location. The facade visible today was erected in 1927.

On 17 March 1905, “Leonhard Tietz AG” (Corporation) was established, its starting capital
comprising ten million marks. Six million marks came from Leonhard Tietz, one million each from his co-founders and brothers-in-law Sally and Max Baumann as well as from his cousins Louis Schloss and Willy Pintus. In the year 1909, shares of the “Leonhard Tietz AG” were traded at the Berlin stock exchange for the first time. In the same year, the first metropolitan department store on Königsallee in Düsseldorf opened its doors. It had been designed by the architect Joseph M. Olbrich and was managed by Leonhard Tietz’s eldest son Alfred Leonhard Tietz. Another new department store designed by Wilhelm Kreis was built in Elberfeld. The new main store in Cologne, which housed the corporation’s headquarters and had also been designed by Wilhelm Kreis, was opened on 8 April 1914, one month after Leonhard Tietz’s 65th birthday. He died of cancer on 14 November 1914 and was buried in the Jewish cemetery in Cologne-Deutz. The second generation of “Leonhard Tietz’s” owners took on the management on 1 January 1919. The eldest son of Leonhard Tietz, Alfred Leonhard Tietz, became president. His cousins Ernst and Franz Baumann and Julius Schloss as well as his brother Gerhard became members of the executive committee. At the beginning of their career, in the early 1920s, they had to
face inflation, which resulted in tremendous difficulties. By means of secondary equity
offerings and by taking on Walter Seidel, a representative of the Dresdner Bank, as member of the executive committee the crisis was overcome. In the following years, the “Leonhard Tietz AG” was consolidated and led to even more success and greater expansion. Yet, due to the secondary equity offerings, the influence of various banks had grown. In 1924/25, investors from the USA gave four million dollars in loans and bonds.
When the NSDAP came to power in 1933, hate campaigns and boycotts against “Leonhard
Tietz AG” began. As early as March 1933 “Tietz” began to re-structure its executive committee and the supervisory board by choosing 50% Jewish and 50% non-Jewish members for each panel. Alfred Leonhard Tietz himself resigned as president of the executive committee. In July 1933, “Leonhard Tietz AG” was re-named “Westdeutsche Kaufhof AG.” By his request, the Wuppertal industrialist Abraham Frowein became president of the supervisory board. The last members of the Tietz family left the corporation by the end of September 1934. Alfred Leonhard Tietz and his wife, his children, and his mother Flora immigrated via Holland to Palestine where he died in 1941. His widow and their children moved to the USA. His brother Gerhard took up residence in London.

How the Story Continued …

After the Second World War, Abraham Frowein remained head of the “Kaufhof Corporation.” As early as 1949 a deal was negotiated with its former owners, which
concerned “payments for unrealized and current salaries and pensions.” In 1951, a settlement was agreed upon which compensated for the loss of shares forced upon the family during the Nazi Era. Ulrich Tietz, a grandson of Leonhard Tietz, took part in the celebrations of the company’s centenary in 1979.