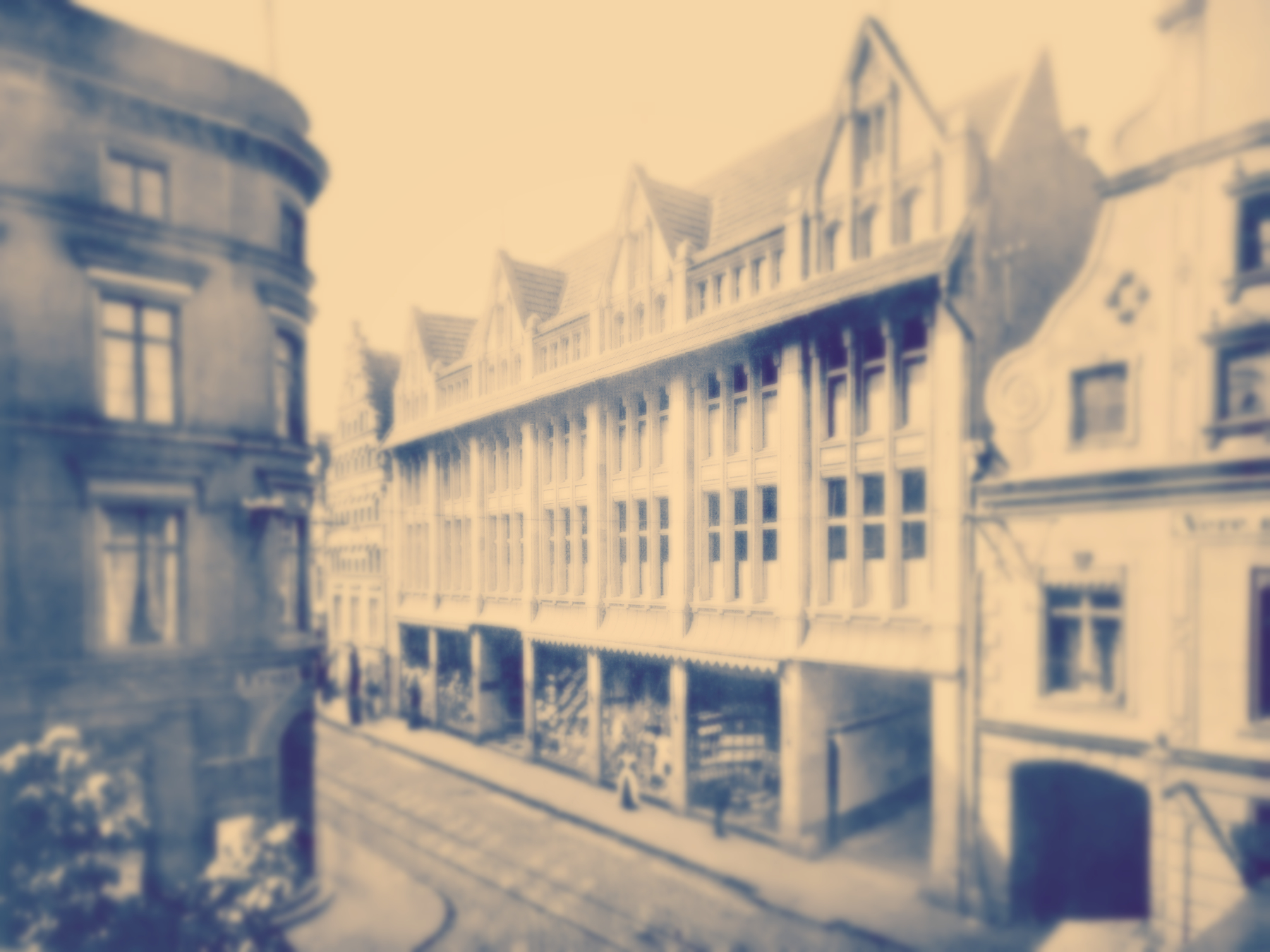 The brothers Abraham and Theodor Wertheim opened a fashion store called “Manufacturund Modewarengeschäft” in Wasserstrasse 14 on 15 April 1852, which sold manufactured textiles. Yet, Abraham Wertheim soon started his own business. On 17 April 1855, he married Ida Wolff from Prenzlau, daughter of the respectable textile merchant Wolf Loeser
Wolff. Within 14 years, Ida gave birth to nine children. In the early 1870s, their sons Hugo and Georg Wertheim started commercial apprenticeships in Berlin in their uncle’s business. Afterwards, they returned to Stralsund in order to join
their parents’ business as partners. They had opened a new Wertheim store on 17 November 1875 in Mühlenstrasse 50, on the corner of Mönchstrasse. Hugo and Georg introduced new business principles, e.g. their shop could be frequented without an obligation to purchase anything. Acquisitions could be returned or exchanged. Fixed prices were another novelty. Cash payment was mandatory and goods could no longer be bought on credit. Because these stores flourished, the building at Mühlenstrasse 56 was purchased and a second shop was opened, which started off so well that Georg Wertheim proudly wrote in his diary “Without doubt, we now have the largest retail store in Stralsund.” On the second floor, the Wertheims were able to furnish an appropriate home.

After the early death of Hugo Wertheim on 23 January 1883, primarily Georg was responsible for the enterprise. He initiated its expansion to other cities. The first branch opened in Rostock on 1 April 1884. With his brothers Wilhelm, Franz and Wolf he established a general partnership (Offene Handelsgesellschaft), which was still named “A. Wertheim,” and in 1885 opened a “store for manufactured fashion and ladies’ wear” in Rosenthaler Strasse in Berlin. The merchandise was complemented by knitwear and twine. In 1890, another branch opened at Moritzplatz, after the whole family had moved to Berlin in 1888. Abraham Wertheim died in 1891. Economic success called for further expansion. The first newly-built department store was located in Oranienstrasse. The store, designed after the “Grand Magasin” in Paris, consisted
of four floors and an atrium. It opened on 30 November, 1894. In 1897, another new department store opened in Leipziger Strasse 132/133. Two years later, an annex was erected at Leipziger Strasse 134/135. The striking Wertheim-building at the street corner followed in 1904. Alfred Messel was the architect of all these buildings. The extensive range
of goods comprised clothing, furniture, food and cosmetics as well as building materials and machines. The way the merchandise was presented as well as the famous architecture and the luxurious interior design attracted customers. “Let’s go to Wertheim’s” was a slogan of these years. A fourth and a fifth construction phase were to follow.

On 5 December 1903, Wertheim opened the big department store in Ossenreyerstrasse 8–10. In 1927, the store was enlarged by purchasing lots no. 11 and 12. The existing houses were demolished. The impressive skylight which is still visible today dates from this time. The Stralsund store is one of the few remaining buildings of the former Wertheim Empire. The success of the Wertheim stores sustained. Evolving criticism was often based on antiSemitic resentments and encompassed Wertheim’s competitors such as Leonhard Tietz, Hermann and Oscar Tietz (Leonhard’s uncle and brother) as well as Salman Schocken, too. At the instigation of the medium-sized companies’ lobby, the Prussian House of Representatives passed the Department Store Tax Act on 18 July 1900. Department stores with a turnover of more than 400,000 Reichsmarks per year had to pay an additional tax. However, this did not lead to a loss of turnover for department stores, but impaired their producers’ and suppliers’ profits, as the department stores enforced a 3 % discount on them. In 1929, Wertheim achieved its highest turnover of 131 million Reichsmarks, while the other department stores already experienced a sharp drop in revenue.

Wertheim during the Nazi Era

From 1933 onwards, the National Socialists carried out massive propaganda against all department stores. On 1 April 1933, there was a nationwide boycott against Jewish shops and department stores. In 1934, Georg Wertheim bestowed his entire fortune on his nonJewish wife Ursula, and at the same time, the separation of property was agreed upon. However, the pressure on Wertheim did not subside; on 1 January 1937, he noted in his diary: “withdrawal from the business.” A consortium managed the assets of Ursula Wertheim. The company “A. Wertheim” was converted into the AWAG group (Allgemeine Warenhaus Gesellschaft AG) in October and thus continued to exist. Due to outside pressure, Georg Wertheim and his wife divorced in 1938 after 32 years of marriage. He died of pneumonia on 31 December 1939, and was buried in the Cemetery of the Holy Trinity (Dreifaltigkeitsfriedhof) in Bergmannstrasse in Berlin-Kreuzberg. In 1941, Ursula Wertheim married the former Wertheim legal advisor Arthur Lindgens who at that time managed the majority of the company’s shares. In 1933, the Wertheim family comprised 38 members. Most of them immigrated to the USA in time. Three family members were killed in Auschwitz, three others survived persecution in hiding.

How the Story Continued …

After the Second World War, most of the properties located in West Germany were sold to Hertie, the group of Hermann Tietz’s department stores which had been “aryanized” in 1934. On some of these properties, new department stores were built under the “Wertheim” brand, for example on Kurfürstendamm and in Schlossstraße in Berlin. In the Soviet occupation zone, all shops and real estate owned by the company A. Wertheim/AWAG, including those in Rostock and Stralsund, were expropriated without compensation. After 1989, a complicated legal dispute developed between the heirs of the Wertheim family and Hertie’s successor Karstadt Quelle AG over the properties at Leipziger Platz in Berlin. The legal dispute was settled after several years, when Karstadt Quelle AG agreed to pay the Wertheim heirs a compensation of 88 million euros.